Showing posts from July, 2020
Show all

The Story of Josh and Molly Pilcher!

Josh and I met when I was 18 and he was 24. We were engaged when I was 19 and Josh was 25 and married on August 2 nd , 2014 at 20 and 26. Once we were married, we decided it would be a great idea to buy our first house and remodel it all while being newlyweds. There were a lot of long nights spent ripping out plaster and old insulation; moving the stair way and adding another bathroom upstairs. Then picking out flooring, cabinets, counter tops and paint. It was a lot of hard work, but we were able to make it our forever home. We have now been in our home for 5 years! After we were all moved in and settled, we thought that we would try to have a baby. We thought it would come easy, but we were extremely wrong. We tried for a year and a half before I did a bunch of testing to find out that I have Poly Cystic Ovarian Syndrome (PCOS). PCOS makes it very hard for me to get pregnant without being on the right medication. Once I was on the right medication it took 4 months and on my
Post a Comment
Read more 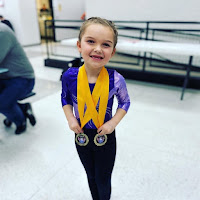 Competitiveness is something I was born with as sports were a big part of my life growing up. My brother and I lived at the gym watching my Dad coach, play old men’s basketball, or at a diamond watching slow pitch.   It was at a young age that I realized losing was one of the worst feelings in the world.   My earliest memory is being in gym class trying to out race all the boys. No matter how hard I tried, I never came in first.   Each time I lost I felt so angry. My Dad was normally coaching my brother and I no matter what sport it was.   Most people thought he was harder on us than the rest of the team and they were right!   My brother and I knew it was just because he wanted to push us and wanted us to get better.   We had a few rides home that weren’t so fun but if he knew we were giving it our all that’s what really mattered.      I believe that growing up around sports is a big part of who I am today.   Being a good loser takes maturity and practice.   It also teaches us to
Post a Comment
Read more
More posts