Memorial Day 2019, we added another member to our family. Tucker is a miniature golden doodle. Tucker’s mom is a golden retriever and his dad is a miniature poodle. My youngest daughter had wanted a dog for a couple years, but with us on the go, traveling to her and her sister’s sporting events, the answer was, “no, we are not home enough to have a dog”.  Mom finally gave in.  After months of my daughter asking, I said “ok”. I had thought of how many pets I had as a kid, and finally concluded that I was not really being fair to her. So began our search.  I had a golden retriever before I had my girls and loved him and his temperament, but we were living in town and our house was smaller.  I thought maybe we should try to go with a smaller dog, but still wanted the temperament of the golden retriever. So, my daughter and I went to the internet and began looking.  We came upon the mixes of breeds with golden retrievers and found golden doodles.  We kept looking and found a place not to far from us that had miniature golden doodles. We looked at the web page and what puppies they had available.   Instantly she fell in love.  We contacted the breeder and the one she fell in love with online was already sold.   They told us not to worry they had many litters coming and it would be best if we came down and visited. So last April we headed down to West Point and picked out her puppy.  We were told that we could come and pick him up in 4 weeks when he would be 8 weeks old. We headed to West Point the morning of Memorial Day to pick up our newest family member.  My girls were so excited, it was like it was Christmas when they were little, and they just couldn’t wait to take him home. 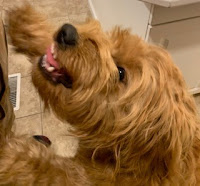 Over the next weeks, it was like having a newborn baby at home, getting up in the middle of the night to take him out to go to potty…. And, of course, this was mom’s job even though this was my daughters’ dog. As the months went by, he got better about sleeping through the night and holding it till morning.  Tucker took many adventures early on his life, he attended softball games and even took a ride in the dump truck. He is always smiling! Yes, I said smiling.  When we get home, he is smiling so big that you can hear him snort.  I have only seen one other dog in my life smile.  It was a Doberman pincher when I was a kid and I was freaked out thinking she would bite, but she was just happy to see you.  The people that see him smile sometimes will say, “Will he bite?”, and we just say “No, he’s smiling!”

I had forgotten what it was like to have a dog, happy to see you when you get home and you could be having the worst day in the world but they can make it all go away with a wag of the tail, or in or our case, a smile.

Up until the last year, I had been very fortunate that I have not lost anyone significantly close to me. Like most, I thought I knew what to expect.How very wrong I was.
My experience was scary, numbing, exhausting, and incredibly soul shaking.I lost my mom on Oct 16, 2018.She was a kind loving individual, who gave without expectation. Her last few years were a health struggle, but that did not stop her wonderful smile and ornery attitude. She was gracious until the end.
I cried everyday for over a month after her death. I still cry and think of her daily. I wonder what it is like in heaven.I have questions that will never be answered. I wish I knew how to cook and garden as well as she did, I wish I knew how to can, I wish I knew how to make homemade jelly, I wish… By: Jill Burnett

“We Bought My Sister at the Airport”, Our Adoption Story 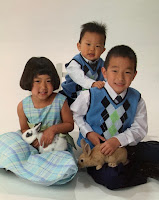 A doctor’s mis-diagnosis nearly took my life when I was eight years old.  It wasn’t until I was in my twenties that I learned the full extent of the damage that was done from a ruptured appendix.    After eight attempts at in-vitro fertilization, we began the adoption process.  This will be easy, right?...…wrong.  There are so many things to learn, decide and complete.  What type of adoption, domestic or international?  What country?  It costs what?  We have to fill out an application.  What paperwork?   More paperwork?   It takes how long?  We have to wait?  Fingerprints at the Federal Building in Des Moines.  A physical exam with a doctor and a blood test, seriously?  A social worker will visit us, and we need personal recommendations.  We must attend a class?  Why doesn’t everyone who wants a baby have to go through this?  This must be like the application process for a job with the FBI!  This is not fair!
The paperwork started and the wait began.We had a checklist that I referred t…
Read more 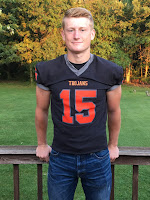 A few weeks ago, my son Drew came home and told me he had taken his girlfriend out for supper. We had the usual conversation of where did you go, what did you have, was it good? He answered all those questions, then he said something that caught me totally off guard.He said that when he went up to pay for his meal, he told the person at the register to add in the elderly couple’s meal that was in the restaurant. I must admit I was a little taken back when he told me this.I asked him if he knew the couple and he said no.He said he just thought it would be a nice thing to do.
I responded with the comment that small random acts of kindness can go a long way in making someone’s day.As a parent you always want your children to do the right thing and show kindness.I am so proud of him to take it upon himself and pay it forward to someone that he didn’t even know.
This kind gesture is proof positive that maybe all of my lectures didn’t just go in one ear and out the other. By: Jennifer Marti…
Read more